Hop on a sprinter van limo in New York City and explore Buffalo with family or friends!

The city of Buffalo in Erie County is the second most populous city in the state of New York, next to NYC. It has lots of attractions and plenty of sites you can visit. So it makes a perfect side trip if you are on vacation in the Big Apple. 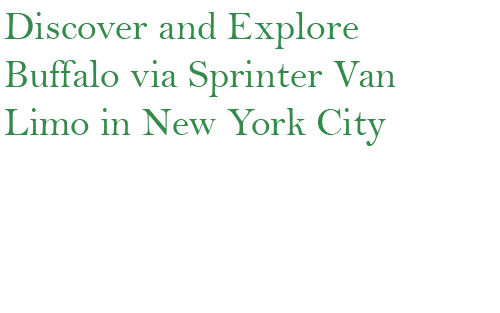 In this series, Custom Coach and Limo is giving you a list of places to go in Buffalo. With a sprinter van limo in New York City, you can visit as many of them as time permits.

Forest Lawn is one of the country's premier historic cemeteries. Founded in 1849, Forest Lawn covers 269 acres and is home to over 152,000 graves, including that of late U.S. President Millard Fillmore, inventor Lawrence Dale Bell, singer Rick James, as well as 47 Buffalo mayors and other notable citizens who helped shape Western New York's historic landscape.

However, Forest Lawn is more than just a cemetery. It also serves as a park, an arboretum, and an outdoor museum, with its monuments, sculptures and mausoleums that have attracted visitors for a century and a half.

One of the things you should not miss when you visit Buffalo is Frank Lloyd Wright's architectural masterpieces. Wright is known for advocating organic architecture, which is characterized by s structure's harmony with humanity and nature, and for advancing the Prairie School movement, which is an architectural philosophy that is marked by horizontal lines, hipped or flat roofs with broad overhanging eaves, windows that are grouped in horizontal bands, and a structure's integration with the landscape.

One of the best residential works of this architectural genius is the Martin House Complex, which is a very unique complex composed of the main house, the smaller Barton House, a glass-roofed conservatory that is connected to the main house by a hundred-foot pergola, a carriage house with stables and the chauffeur's quarters, and a gardener's cottage. The complex is now a National Historic Landmark.

Visitors can arrange for tours exploring the buildings and their surrounding landscape as well as of the furnishing that were also designed by Wright. You can also see a large art glass collection. Tours explore the buildings, surrounding landscape, and an extensive collection of art glass and furnishings, all designed by Wright, which together form a totally integrated architectural masterwork. Custom Coach and Limo welcomes you to this National Historic Landmark.

Kleinhans Music Hall was built in the late 1930s and was opened the year after. In 1989, it was declared a National Historical Landmark and is recognized as one of the greatest concert halls in the country. It now serves as the home of the Buffalo Philharmonic Orchestra.

Shea's Performing Arts is a theater for touring Broadway musicals and for special events in the city. It boasts having one of the few theater organs in the country that are still in operation. Called the Mighty Wurlitzer, the theater's custom-designed organ from the Wurlitzer Company was one of only 5 in the world having tonal finishing after it had been installed in the theater.

This science museum is just perfect if you have kids in your group. It boasts an extensive collection of over 700,000 specimens and artifacts mainly representing life in the Greater Niagara Region. This collection is divided into various exhibits. The museum also hosts various programs catering to different age groups.

Make sure to get a sprinter van limo in New York City to drive you around Buffalo.

The Buffalo and Erie County Naval & Military Park is a museum located on the shore of Lake Erie. This park houses several decommissioned US Naval vessels, including the Fletcher-class destroyer USS The Sullivans, the Cleveland-class cruiser USS Little Rock, and the submarine USS Croaker. These three are open for public tours.

The Buffalo City Hall is a towering art deco masterpiece that is a landmark and tourist site in itself. It is decorated with figures and symbols that portray the city's history and spirit. The observation deck on the 28th floor offers visitors panoramic views of western New York and Lake Erie.

If you love William Shakespeare and would want to see one of his plays live without spending too much, then the Shakespeare in Delaware Park is just the thing for you. SDP is a non-profit, professional theatre company that provides audiences with free, high-quality public theatre that focuses on the works of the great English playwright. SDP has been a summer tradition in Buffalo since 1976. SDP's performances take place on a grand Tudor-style stage on a sweeping green hill behind the park's rose garden.

With a sprinter van limo in New York City, you and your group can tour Buffalo comfortably and luxuriously. One sprinter van can accommodate up to 10 people, so it is the ideal transportation solution for family trips or trips with close friends.

Make sure to book a sprinter van limo in New York City ahead of time. Call us now.

This site was where Theodore Roosevelt was inaugurated as President of the United States in 1901. So if you want a piece of history, make sure to drop by the Wilcox Mansion. You can see exhibits centering on the assassination of previous president William McKinley, on Roosevelt's inauguration and his life in general, and on events in turn-of-the-century America. There are also period gardens and historic neighborhoods that visitors can tour around.

The Albright-Knox Art Gallery boasts a collection of contemporary and modern art that visitors can see in various exhibits.

These gardens are all about beauty and splendour. You can see plants, flowers, herbs and cacti from all over the world housed inside an 1890s Victorian-inspired glass-domed greenhouse. Designed by landscape architect Frederick Law Olmstead, who was also the chief architect for New York's Central Park, the site is listed on the National Register of Historic Places.

Have twice the fun with a sprinter van limo in New York City. One van can comfortably seat up to 10 people, so no need to drive in separate cars if there are that many of you. There is nothing more enjoyable than driving to places together in one vehicle!

If you want a free and relaxing evening outdoors, head over to the Erie Basin Marina and stroll through their beautiful gardens and the magnificent half-mile riverfront walkway. You can go onward to the observation lighthouse, found at the far end of the marina. There really is nothing more soothing and relaxing to the senses than a breath-taking sight of the plants at the garden and of the waters and boats of Lake Erie and the Buffalo River.

The Buffalo Zoo is another place you could visit if you are vacationing with kids. Founded in 1875, this one is the third oldest zoo in the country. Standing on 23.5 acres of Delaware Park, the Buffalo Zoo boasts a diverse collection of wild and exotic animals as well as more than 320 different species of plants.

The Allentown Historic Preservation District in Buffalo made it to the list of National Registry of Historic Places in 1980, being one of the first and the largest residential historic districts in the country. It is also considered as one of the best examples of urbanism in Western NY.

By no means is this list complete as there is just so much more that Buffalo can offer! Make sure to do some more research to find out more sites that might tickle your fancy.

Of course, make sure you have a sprinter van limo in New York City to take care of your transportation needs. There is nothing like driving around places in just one vehicle, because a sprinter van limo can accommodate up to 10 people. Needless to say, it is comfort, style, convenience and luxury combined.

Call us to book a sprinter van limo in New York City for your Buffalo trip!