Get on a Bus Rental in NYC and Experience New York City: Historical Sites

With a bus rental in NYC, you can easily and convenient visit New York City's many historical sites and landmarks. Let's start this guide off by giving you a few of the places that are just teeming with history and that tell of the city's glorious past. 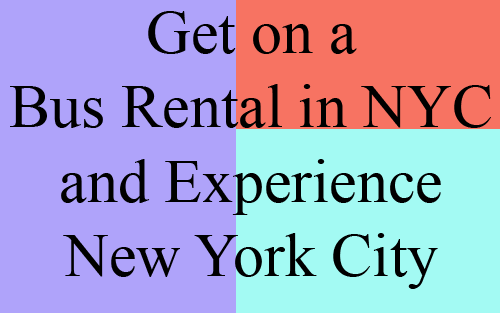 Empire State Building. Empire State Building in Midtown Manhattan's 350 5th Avenue is a 103-story skyscraper that stood as the world's tallest building for nearly four decades. Completed in 1931, this Art Deco building is considered an American cultural icon and is now designated as a National Historic Landmark.

Grand Central Terminal has been listed on the National Register of Historic Places and was also declared a National Historic Landmark. It is considered the world's loveliest station, with its meticulously crafted detail and monumental spaces.

Louis Armstrong House. The home of beloved jazz legend Louis Armstrong and his wife was built in 1910 and is listed as a National Historic Landmark. The house, located in Queens, now operates as a historic house museum, where you can see writings, books, memorabilia and recordings focusing on Louis Armstrong, and where educational programs and concerts are presented.

New York City has a very rich history, and this is evident with the many historical sites and landmarks that you can visit. But to make it easier for you to plan your trip, we have come up with a narrowed down list and focused on the more popular and more visited ones. So you can choose from among these venues and book a bus rental in NYC for your vacation.

Brooklyn Bridge. Brooklyn Bridge is the very first bridge of its kind and has, at one point, been known as the world's largest. It is a steel wire suspension bridge that spans the East River and connects the boroughs of Brooklyn and Manhattan. Opened in 1883, the 131-year-old bridge is now a National Historic Landmark and a National Historic Civil Engineering Landmark.

Andrew Carnegie Mansion. Located at 5th Avenue in Manhattan, the 1903 mansion was once the home of Andrew Carnegie and his wife, Louise. The mansion is now being operated as the Cooper-Hewitt National Design Museum, which is a part of the Smithsonian Institution and has one of the largest collections of decorative arts in the world.

For those who do not know, Carnegie was a Scottish-American industrialist who had led the great expansion of the American steel industry in the late 19th century.

Central Park. Central Park in Manhattan is one of the most visited parks in the world. This urban park was initially opened in 1858 and is now listed as a National Historic Landmark. Occupying 843 acres today, the park has various features and attractions, including playgrounds, a Swedish Cottage Marionette Theatre, the Central Park Zoo, the Bethesda Fountain and Terrace, and many others.

Get on a bus rental in NYC and visit as many of the city's historical sites as you can. That way, you get to know more about its past.

City Hall. New York City's City Hall, located in Lower Manhattan, was built in 1811 and is the oldest city hall in the country. The city hall still houses NYC's original government functions, like the offive of the Mayor of New York City.

The Dakota Apartments. The Dakota in Manhattan was built in 1884 and showcases a lovely Renaissance and English Victorian architectural style. The Dakota is a prestigious cooperative apartment building, which served as home of former Beatle star John Lennon for 7 years and was also the location of his murder.

Green-Wood Cemetery. The cemetery, founded in 1838 in Kings County, New York, was a popular tourist attraction in the 1850s. Most of the famous New Yorkers who passed away during the second half of the 19th century are buried here.

It would be nice to have a bus rental in NYC to drive you and your group around the city and to take you to these historical spots. No more waiting for buses, or taking the subway.

Other sites you should not miss while riding a bus rental in NYC include:

It would be nice if you hop from one destination to the next with a bus rental in NYC. You no longer have to deal with crowds after crowds of strangers in buses, in the subways, and on the streets.

other places you can go to are:

Other places you might want to check out are:

Make arrangements for a bus rental in NYC to drive you around the city and take you from one destination to another. It would be the most convenient and the most time-efficient transportation solution for touring, especially if you are doing it as a group.