Long Island is an island in New York that comprises four counties, including the NYC boroughs of Brooklyn and Queens. It spans 118 miles and has plenty of attractions to see and visit. So if you are planning to discover and explore Long Island with friends and family, be sure to get a New York bus charter so you can take in as much of the island as you can.

Now if you are wondering what exactly you can do in Long Island, Custom Coach & Limo has come up with this guide. We have listed down the places you can see and visit and the things you can do there. As long as you have a New York bus charter to take care of your transportation needs, exploring Long Island will be easy and enjoyable. 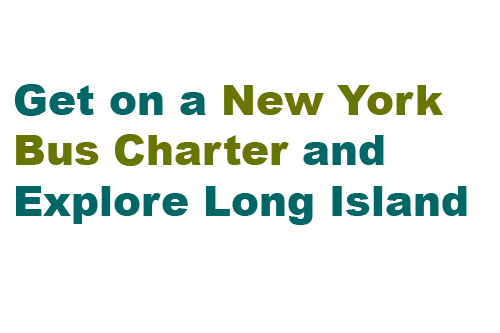 Go to the Beach!

Long Island has good beaches that stretch for miles. You can go to Long Island during the summer and lounge on the sand under the sun. Get a tan, have a picnic with the family, and swim a little.

For one, there's Jones Beach State Park, which is six miles of beach and a lovely boardwalk where you can go for a romantic stroll. The Nikon at Jones Beach Theater, an outdoor amphitheatre that hosts various performances, can also be found here. And if you happen to be in Long Island on Memorial Day weekend, you should go to the Jones Beach Air Show. Jones Beach State Park also has an annual Fourth of July Fireworks show. Meanwhile, you can catch rock concerts at the Bay Stage every now and then.

There are also lovely beaches, a boardwalk, and a lighthouse at Fire Island.

Or you can go to East Hampton's Main Beach if you want to sunbathe and swim with celebrities. Every year on Labor Day, Main Beach holds a spectacular fireworks display.

You can also head to the North Shore, where you not only get to surf and enjoy the beaches, but also do a ton of other activities. Oyster Bay Beach, for one, offers kayak rentals and has the Nantucket Lightship. Sea Cliff Beach, on the other hand, is much smaller and you can see lovely Victorian homes here.

With a New York bus charter, you can also check out other beaches in Long Island, such as Hubbard County Park, Garvey's Point Preserve, and Coopers Beach.

Custom Coach & Limo is giving you this guide to Long Island should you decide to visit and explore this part of New York state. There are many things to see and do here. And as long as you have a New York bus charter to drive you around, you will get to enjoy as many of these attractions as time allows.

Get a Glimpse of Long Island's Arts and Culture Scene.

Long Island has a rich and diverse art and culture scene. You can go to the Long Island Museum of American Art, History & Carriages in Stony Brook. The Long Island Museum has over four thousand works of art, including paintings, sculptures, and prints. It is particularly known for its collection of over 20 carriages and of paintings by William Sidney Mount.

There's also the Parrish Art Museum, which was designed by Herzog & de Meuron Architects, and focuses on the works of local artists. The museum was founded in the 1890s and is now regarded as one of the country's major art museums, with at least 2,600 artworks dating back to as far as the 19th century. Some of the works that you can see here are those done by popular contemporary artists like Jackson Pollock, Chuck Close, April Gornik, John Chamberlain, Elizabeth Peyton, Eric Fischl, Dan Flavin, Roy Lichtenstein, Donald Sultan, Lee Krasner, and Willem de Kooning. You will also see the art of American Impressionist William Merritt Chase, as well as important works by realist painter Fairfield Porter.

Make sure to have a New York bus charter to take you museum-hopping! There are so many great cultural venues in Long Island that it would be such a waste to miss them just because you have problems with transportation.

Housed in a lovely Beaux-Arts building, the Heckscher Museum of Art houses more than 2,000 works of art that include the 185 pieces donated by August Hecksher in the 1920s, works by Long Island artists, landscape paintings, American and European modernist art pieces, and photographs. A lot of people also visit the museum to see its most famous painting, the Eclipse of the Sun by George Grosz. Other notable artworks include the Virgin, Child, St. John the Baptist and Angels by Lucas Cranach the Elder, as well as works by Georgia O'Keeffe, Helen Torr, William Merritt Chase, Arthur Dove, George Grosz, Frederic Church, Asher Durand, Thomas Eakins, Winslow Homer, Thomas Moran, Edward Moran, Ilya Bolotowsky, George Inness, Knox Martin, and Esphyr Slobodkina.

The Hofstra Museum, on the other hand, was founded in 1963 and houses more than 5,000 art works from around the world dating as far back as 5,000 B.C. It has two galleries: the David Filderman Gallery and the Emily Lowe Gallery. The museum also has a photography collection that includes works by Andy Warhol, Edward Weston, Berenice Abbott, Danny Lyon, August Sander, and Lucien Clergue.

Do not forget to rent a New York bus charter to take care of all your transportation needs in Long Island. Having one will make it easy, comfortable and convenient for your group to go to various destinations together.

Another museum worth visiting is the Nassau County Museum of Art. Its main building is a Georgian mansion and it has a space for children, a formal garden, an Art school, and a sculpture park. You will also enjoy the combination of art and nature, as the museum has walking trails and some rare trees.

The Nassau County Museum of Art's sculpture garden is one of the largest publicly accessible sculpture gardens in the region. You can see more than 40 sculptures here, including works by famous sculptors like Alexander Calder, Chaim Gross, Tom Otterness, Masayuki Nagare, Fernando Botero, Manolo Valdes, Richard Serra, and Alejandro Colunga.

You should also check out the walking trails and gardens, commissioned by Frances Frick in the 1920s and designed by Marian Cruger Coffin.

When visiting Long Island, be sure to have a New York bus charter driving you to your destinations. It will make things quicker and will cut down travel time, allowing you to maximize your trip.

There's the Tilles Center for the Performing Arts, which is considered to be Long Island's premier concert hall. It is the home stage of performing arts organizations like the Long Island Philharmonic and the Eglevsky Ballet. The center has a 2,200-seat concert hall and features operas, Broadway shows, orchestral music performances, as well as modern dance and ballet performances. It also has the 490-seat Hillwood Recital Hall, where you can catch chamber music performances, theater shows, cabaret, recitals, productions for children.

You can also visit the Nassau Veterans Memorial Coliseum & Exhibit Center. This is a multi-purpose arena that serves as the home of National Hockey League's New York Islanders. Opened in the 1970s, this 16,000-seater coliseum is currently used for concerts, trade shows, exhibits, and other performances.

Then there is the Staller Center for the Arts, the State University of New York's main arts building. At one division is the school's art and music departments, while the other houses the dance, theatre, and media departments. The Staller Center has the Paul W. Zuccaire Gallery, the recital hall, and three black-box theatres. It also boasts a 1000-seat performance venue with a 40-foot screen and which is home to the Pocket Theater Club and Stony Brook Film Festival.

Other than these major performance venues, Long Island also has smaller community spaces including the Gateway Playhouse in Bellport, the John Engeman Theater in Northport, and the Bay Street Theatre Sag Harbor.

Get on a New York bus charter and visit Long Island's historical sites and landmarks. You can begin with the Long Beach Hotel, which opened in the 1880s. Then there's Ouimet Canal, named after famous golfer Francis Ouimet, as well as Gene Sarazen Canal, Bob Jones Canal, and Walter Hagen Canal. All of these other canals were named after popular golfers.

Other historical spots in Long Island include:

Of course, these are just a few of the more than 400 historic places in the island that you could select.

Other than these historic places, there are also heritage museums in Long Island that house exhibits on anything and everything, like the Native Americans and their history and even the island's whaling history.

If you are into architecture, you will surely enjoy checking out the many mansions in Long Island, including the Mansion at Timber Point in Great River, the Caumsett Historic State Park in Lloyd Harbor, and the Bourne Mansion in Oakdale.

Now that we have given you a short list of museums, art galleries, performance venues, historical sites and landmarks, and beaches, what more is left to do?

Herd everyone in your group into a New York bus charter and visit Long Island's outdoor venues, where you can engage in sports and certain outdoor activities.

If you are in the mood for some camping, Long Island has beachfront sites and camping grounds where you can set camp and build fire. You can go to Battle Row Campground in Old Bethpage, which comprises 44 acres of dense woods and campground. It has 52 campsites with water and electricity and 12 tent sites. There's also Smith Point County Park in Shirley, which is considered to be Suffolk County's largest oceanfront park and which offers camping, scuba diving, swimming, saltwater fishing, and surfing.

Other areas where you can go camping and do other outdoor activities are Cupsogue Beach County Park in Westhampton, Eugene Nickerson Beach & Campground in Lido Beach, and Indian Island County Park in Riverhead.

Long Island also has excellent fishing sites, thanks to its long, 400-mile shoreline. There are marinas dotting the area, and you can go fishing here. So if you are visiting Long Island in and between the months of June and October, you might even see some major fishing competition, such as the Star Island Shark Tournament, the Ducks Unlimited Striped Bass Tournament, and the South Shore Surf Fishing Classic.

Now how else can you enjoy the outdoors in Long Island?

How about playing a round of golf? Long Island has some of the country's best golf courses. In fact, you have over 60 golf facilities to choose from, so whatever your skill level is, there is surely a place for you.

There's Bethpage Black Golf Course, which is a public golf facility considered to be the most difficult among five course at Bethpage State Park and which has hosted several tournaments, including the U.S. Open in 2002 and 2009. You also have Spring Lake Golf Club in Middle Island, a 27-hole public golf facility on a sprawling 180-acre property.

Other golf courses in Long Island include:

You can also go hiking, walking, running or biking on one of Long Island's many paths and trails. One example is Fire Island's 200-year-old Sunken Forest. You can also hike up Jayne's Hill.

Another outdoor activity you can do here is horseback riding. You can head over to Montauk's Deep Hollow, known to be the oldest cattle ranch in the country. There's also Bethpage Park Polo fields where you can play a competitive game of polo.

With a New York bus charter, you can enjoy as much of the outdoors as you can. You can go hopping from one outdoor venue to the next and be mesmerized by the wonderful sceneries.