Nassau County is a suburban county found on Long Island, which is immediately east of NYC, within the New York Metropolitan Area. In 2012, Forbes Magazine reported Nassau as the richest county in the state of New York and the 12th wealthiest in the country. That alone should make Nassau a county worth visiting via a sprinter van rental in New York.

And Nassau County is not just rich in terms of its annual median household income. It is also wealthy in terms of vacation destinations, historical sites and scenic spots. 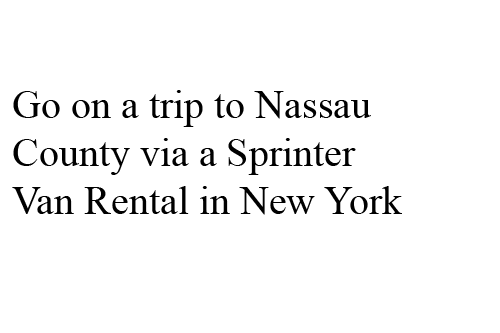 So speaking of places in Nassau County that are worth seeing or checking out, we have come up with a few suggestions. As long as you have a sprinter van rental in New York, you can visit as many of these venues as you can.

Want to experience how life was in America in the 19th century? Go to the Old Bethpage Village Restoration at 1303 Round Swamp Road, Exit 48 of the Long Island Expressway. This place is a 209-acre recreated mid-19th century American village. You will find dozens of historic buildings, like a church, an inn and a store that were transported from different places in Long Island. There are also actors dressed in pre-Civil War costume who will bring life to the village. You can also watch out for farm work ad craft demonstrations here.

Call (516) 572-8400 for more information about the Old Bethpage Village Restoration.

Sagamore Hill is the home of Theodore Roosevelt. In fact, from the years 1902 to 1908, when Roosevelt served as U.S. president, Sagamore Hill was known as the “Summer White House.” He lived here until he died in 1919. And Sagamore Hill, which is now managed by the National Park Service, remains as it was back then.

The property grounds include a songbird sanctuary and an Audobon Center. And there are real-life rangers, too.

The Visitor Center is at 12 Sagamore Hill Road, in Oyster Bay.

You can go on a museums tour in Nassau. The Museum Row is your one-stop destination for some of the best museums in Long Island. Museums Row is located at Charles Lindbergh Boulevard in Garden City and is adjacent to Nassau County Community College. Here are the museums in Museum Row:

The Cradle of Aviation is a celebration of Long Island's contributions to American aviation. There are permanent and changing exhibits featuring legendary aircraft like the actual Lunar Excursion Module that was built on Long Island as well as Charles Lindberg's Jenny. The museum also offers educational programs.

Long Island Children's Museum on 11 Davis Avenue, in Garden City, is a fun, educational and nurturing 40,000-square-foot environment for the whole family. It offers hands-on exhibits, children-friendly films and concerts, and art and science workshops.

If you want to learn about the heritage of Nassau's local volunteer fire services and know more about fire safety and prevention, this is the place to go. Check out the Nassau County Firefighters Museum and Education Center Web site at http://www.ncfiremuseum.org/ or call (516) 572-4177 for inquiries.

This museum is located at One Davis Avenue, in Garden City.

The Long Island Museum for Science and Technology offers interactive science and technology exhibits in order to teach visitors the importance of science. Log on to http://www.limsat.org/ or call (631)269-6105 for more information.

If you are going on a museum tour in Nassau County as a small group, do not forget to book a sprinter van rental in New York ahead of time. If there are more than 10 of you, you can opt for a mini bus rental instead.

If you want to go on a shopping spree or engage in some retail therapy, then head over to Americana Manhasset, which is also known as the Rodeo Drive of the East Coast. It boasts having over 60 international shops and boutiques, including Cartier, Christian Dior, Burberry, Donna Karan, Dolce & Gabbana, Gucci, Fendi, Jil Sander, MaxMara, Louis Vuitton, St. John, Coach, and Tiffany & Co.

Americana Manhasset is on 2060 Northern Boulevard in Manhasset, New York. For more information, call (800) 818-6767 or log on to http://www.americanamanhasset.com/.

The Sands Point Park and Preserve is a great destination for the romantic and for those who love things medieval. Sands Point features three castle-like mansions: Castle Gould, Hempstead House, and Falaise.

Falaise, which is open to the public, was built for Harry F. Guggenheim and his wife in the 1923. This was during the Gold Coast period, considered to be a time of opulence, when the prominent families of Long Island constructed large estates and great mansions. Falaise features a French eclectic style, with a design that is based on a 13th century Norman manor house. It has many distinctive architectural features like the steeply pitched tile roofs, thickly mortared walls, and a round medieval fortress-like tower. It is also furnished with antiques that date back to the 16th century and houses Renaissance paintings and modern art pieces.

However, if you are more into the outdoors, Sands Point Park and Preserve also offers wooded hiking grounds and trails that lead down the beach on Long Island Sound. You can take a leisurely stroll or go cross-country skiing during the winter.

Arrange for a tour at Sands Point by calling (516) 571-7900. You can also log on to http://www.sandspointpreserve.org/ for more information.

Sands Point is at 127 Middle Neck Road, in Port Washington.

Do not forget to book a sprinter van rental in New York ahead of time so you can fully enjoy your trip around Nassau County.

Old Westbury Gardens on 71 Old Westbury Road, in Old Westbury, NY, is the former estate of John S. Phipps and his wife, Margarita Grace and is now listed on the National Register of Historic Places. The estate's centerpiece is the magnificent Charles 11-style Westbury House, which was completed in 1906 and is nestled amid 200 acres of landscaped grounds, formal grounds, ponds, woodlands, and lakes. The mansion is furnished with exquisite English antiques and artworks.

Today, Old Westbury Gardens welcomes visitors by offering guided tours inside the palatial home and around its grounds and gardens. If you are lucky, you might be able to catch events like car shows, classical concerts, book signings, and horticultural demonstrations being held there.

To arrange for group tours and for more inquiries, call (516) 333-0048. You can also visit its Web site at http://www.oldwestburygardens.org/.

If you and your group are into golf, then play where the pros play! Head over to the Bethpage State Park, which boasts five courses that include Bethpage Black. Bethpage Black was home of the U.S. Open in 2002 and 2009. It is also the only public course on the PGA tour. Facilities include four other color-coded 18-hole championship-length courses and a clubhouse or restaurant. Aside from playing golf, you can also hike, have a picnic, go biking, play tennis and go horseback riding on the 1,475-acre property. During the winter, you can go sledding and cross-country skiing here.

Nassau County in Long Island is not just about state parks, magnificent mansions and formal gardens, but there is something for those who love the water, too. So if you want to take a dip or swim, you can hop on a sprinter van rental in New York and head to these beaches in Nassau County:

The famous Jones Beach State Park at 1 Ocean Parkway, in Wantagh, NY, is known as the world's largest public beach, with over 6.5 miles of beautiful white sand Atlantic Ocean beachfront. It also has two public pools as well as a smaller beach on Zach's Bay. Jones Beach was designed with an ocean liner theme and it offers plenty of activities to visitors. You can go swimming in the ocean or in the pool, stroll the boardwalk, visit an historic exhibit, go fishing, grab a bite from one of the concession stands, play miniature or pitch-putt golf, play a game of shuffleboard and basketball, go biking, surf, learn about marine life at the Theodore Roosevelt Nature Center, or attend concerts at the Nikon at Jones Beach Theater. There are also playgrounds for the kids.

The park's oceanfront setting and its natural environment indeed gives you a refreshing break from your hectic and busy life, especially if you are from the city.

Following the construction of the Long Beach Boardwalk in 1907,

Long Beach came to be known as the Riviera of the East after the construction of the Long Beach Boardwalk in 1907. Now, you can head over there and enjoy the beachfront community. It is the quintessential surf town, complete with beach, bikini bodies, and a hip new hotel north of South Beach.

Log on to Long Beach's Web site at http://www.longbeachny.gov/ for more information.

There is no better way to get to these seaside retreats than through a sprinter van rental in New York. It is comfortable and convenient, and it takes away the hassles of driving separate cars.

A sprinter van rental in New York can accommodate up to 10 people. So it is the best transportation option if there are that many of you.