New York City is one of the premiere shopping capitals in the entire globe. As such, there are simply a lot of shopping centers, malls and districts you can go to on a sprinter van rental in New York City. 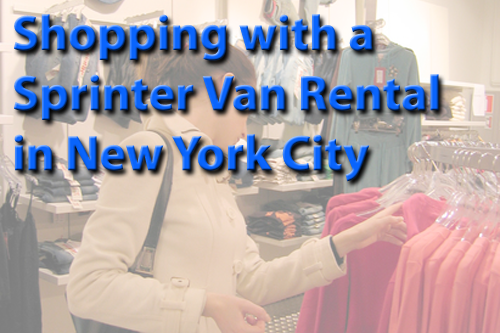 A sprinter van rental in New York City can take a group of up to 10 people to have a great day of retail therapy.

Where can you go for the best shopping experience in the Big Apple?

The short answer is EVERYWHERE! When we said that New York City is a shopper's paradise, we did not exaggerate. You can go to any street especially Broadway or 5th Avenue and find top-notch stores, fashionable shops and famous retailers.

For one, Fifth Avenue is one of the most famous streets in the city. It is also one of the most crowded with luxury boutiques and the biggest department stores. A stroll down Fifth Avenue would introduce you to the world's most famous brands: Apple Store, Abercrombie & Fitch, Bergdorf Goodman, Gucci, Banana Republic, Michael Kors, H&M, Victoria’s Secret, Prada, and Tiffany & Co., as well as host of many others.

Then you have Broadway, the longest street in Manhattan. Broadway stretches from Northern Manhattan to Lower Manhattan. And like Fifth Avenue, you would find a wide variety of retailers on this street as well. You can enjoy the college shops near Columbia, or big box stores such as Urban Outfitters and American Apparel. So if you plan to look dapper for a show or musical you are attending on Broadway, you do not have to look far as great shops await you up and down this famous street.

You also have another popular site in the Big Apple that doubles as a shopping Mecca: Times Square. There are several big name stores here such as Forever 21, Toys R Us, Sephora, Disney and M&Ms Store. And you should also go to its neighboring Herald Square, where you can find the huge flagship store of Macy's, as well as Gap and Victoria's Secret, among other great retailers.

Further, you have Madison Square Park where you can roam the streets in search of smaller shops that are no less in offering you great merchandise. Union Square is one that you should not miss. Check out the Barnes and Noble here where you could read books the entire day.

You can go to 14th Street and check out the famed boutiques that line the Meatpacking District.

Roaming the streets of the Big Apple, you can take in the wonderful sights of the city and buy from the nationally known retailers as well as the local businesses. But if the weather outside becomes either too hot or too cold for you, you can always go to the malls.

Bricktown Center at Charleston has 400,000 sq. ft. of space and has four anchor stores: Bed Bath and Beyond, Target, Christmas Tree Shoppes, and Home Depot. You can also enjoy the greenway here.

Brookfield Place, or better known as the World Financial Center, is a complex of office spaces, that includes the offices of RBC Capital Market, American Express, and Merrill Lynch. And while in the midst of all that high powered banks and financial companies, as well as some of the biggest companies in the world, you can find a food truck court and a food court that has around 2,000 restaurants. You can also check out the high end fashion retailers and other retail outlets between the Three and Four World Financial Center. Or shop at the stores found in the Winter Garden Atrium that has flowers, trees and cafes along with shopping choices.

Time Warner Center is a pair of towers that stand 750 ft. tall. The twin towers have high end retailers, including Swarovski, Hugo Boss, and J. Crew.

The Bronx Terminal Market has a little less than a million sq. ft. of retail space that accommodates 21 stores. The North Building is anchored by Target, Home Depot, and Staples and the South Building is anchored by BJ's Wholesale Club, "R" Superstore, Raymour & Flanigan, Marshall's, Best Buy, and Bed Bath & Beyond. This is one of the newest shopping centers in the Bronx, having been opened only in 2009.

Manhattan Mall has Sterns and A&S as anchor stores and is located in the former flagship store of Gimbels. However, the biggest occupant here is JCPenney's, along with Radio Shack, Hallmark and Victoria's Secret, among other retailers.

Bay Plaza Shopping Center has 780,000 sq. ft. of space that include JCPenney, Kmart, Old Navy, and Staples, along with a variety of department stores, restaurants, a movie theater multiplex, and office spaces. The Bay Plaza holds the distinction of being the biggest shopping center in the Big Apple, and is widely regarded as one of the most successful in the city because of several high performing stores.

Grand Central Terminal has an assortment of curious boutiques, as well as the best of the world's cuisines at its many restaurants.

Check out East River Plaza where you have 527,000 sq. ft. of space that houses 12 stores and services. It is anchored by Burlington Coat Factory, PetSmart, Costco, and Target. Other stores you find here includes Bob's Discount Furniture, GameStop, Marshall's, Old Navy, Planet Fitness, and Starbucks Coffee.

Staten Island Mall has close to 1.3 million sq. ft. of space that is enough for 200 stores, services and restaurants. The mall is the only indoor shopping mall on Staten Island. It is currently anchored by Macy's Sears, and JCPenney. You could shop here and be able to buy from such high end retailers as Pandora, Armani Exchange, and Pandora.

Fulton Street in Brooklyn has Fulton Mall, which is a pedestrian mall that houses 230 stores. That includes Macy's, Finish Line, H&M, GameStop, Gap, Payless ShoeSource, RadioShack, Modell's Sporting Goods, and Foot Locker, among many others.

Atlantic Center and Atlantic Terminal are a pair of shopping malls that have close to three dozen retailers and restaurants occupying close to 800,000 sq. ft. of space. Atlantic Terminal gives you five floors to shop in, including anchor stores such as Men's Wearhouse, Victoria's Secret, and Bath & Body Works. Atlantic Center has 3 floors and includes Best Buy, Burlington Coat Factory, and others.

What do all these mean? You are never too far from shopping in the Big Apple. New York City has several shopping malls that you can visit, and no matter where you are in this city of more than 8 million people, you can always find a great place to shop. So charter a sprinter van rental in New York City today and make sure that you are able to visit all the sites you want to go to and do everything you want to do.

If you want to combine shopping and history, then check out the South Street Seaport. The area is a nationally registered historic district and has some of downtown Manhattan's oldest and finest architecture. You could find a lot of restored 19th century buildings here. However, it is primarily operated as a mall and tourist destination. There is a food court and a variety of shops here as well.

Rego Center has two phases that all together brings in close to a million sq. ft. of retail space. Opened only in 2010, the stores you could find here are Century 21, Bed Bath and Beyond, TJ Maxx, Burlington Coat Factory, Toys R Us / Babies R Us, Dallas BBQ, Vitamin Shoppe, Panera Bread, and Aldi Supermarkets, among others.

Kings Plaza Shopping Center opened in the 1970s and has more than 120 stores and services under its wing. Anchored by Best Buy, Sears, H&M, Old Navy, and Macy's, it is where you would find the first Sbarro pizza restaurant in the world.