There are several top-notch amusement parks that are located within not more than three hours away from New York City. It would make sense to get a minibus rental in New York City and check them out. 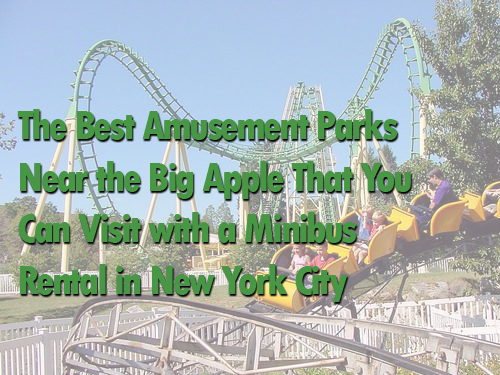 We recommend these amusement parks:

Clementon Amusement Park combines a theme park and a water park. IT is located in Clementon, NJ and is one of the oldest in the world, having been opened in 1907. The amusement park has around two dozen rides.

The water park has several attractions as well, including Big Wave Bay, Torpedo Rush, Laguna Kahuna, Sky River Rapids, Vertical Limit Racer and Lazy River, among many others. Clementon Park and Splash World also has several special events all throughout the year.

You might also want to visit the Hadrosaurus Foulki Leidy Site, Adventure Aquarium, and Battleship New Jersey, which are all nearby.

The kids will surely love a day at an amusement park. Lucky for you, some of the world's best amusement park is very accessible from the Big Apple, especially if you get a minibus rental in New York City.

A minibus rental in New York City can accommodate mid-sized groups from 24 to 49 people. So even if you are traveling with a big group, you can easily transport them without any hassles. Experience only the best and most comfortable minibuses from Custom Coach & Limo!

Now, where else can you go?

With 332 acres of space, Lake Compounce also include a water park and a beach that you can access with your admission. The park has five roller coasters: Boulder Dash, Kiddie Coaster, Phobia Phear Coaster, Wildcat, and Zoomerang. Additionally, it has several rides such as the American Flyers, Bumper Cars, C.P. Huntington Train, Down Time, Giant Wheel, Saw Mill Plunge, Thunder N' Lightning, and Zoomer's Gas N' Go, among many others.

Playland holds the distinction of being the only art deco theme park in the country as well as one of the few government operated and owned amusement parks in the United States. Check out the Dragon Coaster, a wooden coaster from the 1920s. Or you can get on one of the other four roller coasters that they have, including Venom, Crazy Mouse, Kiddie Coaster, and Family Flyer. It also has several other rides that were constructed before the 1930s.

You should not miss the Grand Carousel, a Mangels Carmel carousel from the 1910s and has a band organ. The park also has several free entertainment features. They have nightly main stage performances that included performances from Brendon Yancey, several musicals and dance shows. They also have a summer concert series.

The park also has free fireworks every Friday and special holiday displays.

And while you're in Playland, you can also take the kids to LEGOLAND Discovery Center, Rye Nature Center, Jumpin' Jeepers, Muscoot Farm, and Leapin' Lizards.

Or you can go to:

A water park and amusement park in one, Dorney Park & Wildwater Kingdom first opened in the 1880s and has some of the most prominent roller coasters in the country, including the Steel Force, among the longest in the world.

If you're not up for these rides, you can go on the family friendly rides such as Antique Carousel, Apollo, Cedar Creek Cannonball, Cedar Creek Flyers, Chance Carousel, Dinosaurs Alive!, Ferris Wheel, Monster, Musik Express, Road Rally, Scrambler, Sea Dragon, Tilt-A-Whirl, Wave Swinger, Whip, and Zephyr Railroad. And if the heat is unbearable, you can enjoy the water rides such as Thunder Canyon, Thunder Creek Mountain, and White Water Landing.

Then you have the many attractions at Wildwater Kingdom. The water park component was officially opened in the 1980s. The water park has 3 aquatic playlands, water fun house, 22 water slides, tubing rivers, wave pools and other water attractions.

If you want to maximize your visit to Dorney Park & Wildwater Kingdom, you might want to see what's nearby. Other attractions in Allentown that you could visit on a minibus rental in New York City:

Six Flags Great Adventure was opened in the 1970s and operates from late March through January of the next year. It welcomes more than 2.8 million visitors a year.

The park has Main Street, which has an early American town feel to it. It has several retailers such as Main Street Market, Looney Tunes Shoppe, and Sweet Treats, among many others. Fantasy Forest makes you feel like a small child again and you can enjoy the bright colors, the YumYum Cafe, Dream Street, and the Strawberry Fair. Some of the rides here include Houdini's Great Escape, Carousel, and the Enchanted Tea Cups.

Then you have Adventure Alley where you have the SkyScreamer, Air Jumbo, Fender Benders, Big Wheel, and other rides. Then have fun at the Congo Rapids and Nitro, found at the Adventure Seaport.

Other sections include Movie Town, Lakefront, Frontier Adventures, Bugs Bunny National Park, Plaza del Carnaval, Golden Kingdom, and Boardwalk. Then you have the restaurants where you can get really delicious food such as the Best of the West, Panda Express, and Granny's Country Kitchen among many others.

If you visit during the Halloween season, be sure to enjoy Fright Fest.

And while you are in the area, be sure to visit all the other fun attractions in Jackson, including Allaire State Park, Monmouth Battlefield State Park, Six Flags Safari, Howling Woods Farm, and Jackson Premium Outlets. Go to all of these places easily with a minibus rental in New York City!

Only three hours away from the Big Apple, Hersheypark was founded in 1906 as a leisure park for Hershey Chocolate Company employees. It is a privately owned park that has won awards such as the IAAPA Applause Award.

On top of the roller coasters, there are also several kiddie rides such as Balloon Flite, Bizzy Bees, Dizzy Drums, East Coast Waterworks, Granny Bugs, Mini Scrambler, Red Baron, Rolling Rovers, Tiny Tracks, and Traffic Jam. And if you visit in the summer, you can also enjoy the water rides such as the Bayside Pier, East Coast Waterworks, Intercoastal Waterway, Shoreline Sprayground, and Tidal Force.

Aside from the rides, you can also enjoy the attractions. There is the Hershey's Water Works at Hershey Lodge, which opens on Memorial Day Weekend and offers an indoor pool complex. Then you can go on the Chocolate Making Tour Ride, which tells you about how the company makes it chocolates, as well as high-tech innovations, more lovable animals and top of the line cars.

Visit the Milton & Catherine Hershey Conservatory at Hershey Gardens where you have a new 16,000 sq. ft. conservatory that includes a butterfly atrium, horticultural wing, and others. You can even stay at one of the official Hersheypark resorts: the Hershey Lodge, the Hotel Hershey and the Hersheypark Camping Resort.

Make it a well rounded vacation with a minibus rental in New York City!

Shop at Tanger Outlets Hershey or at the Crossroads Antique Mall. Then tour a museum, pick between Antique Automobile Club of America Museum or the Pennsylvania State Police Museum. You can even have a trip down memory lane at the Founder's Hall at the Milton Hershey School or at the Hershey Derry Township Historical Society.

Other places you can go to while in Hershey are Troegs Brewing Company, ZooAmerica North American Wildlife Park, and Cullari Vineyards and Winery.

Located in Seaside Heights, NJ, the waterfront amusement park was partially damaged by Hurricane Sandy. But that was in 2012 and today, the amusement park is stronger than ever. It currently has several family rides, concession stands and games.

Enjoy the flat rides such as the Air Race, Bumper Cars, Moby Dick, Musik Express, Pirate's Plunge, Shore Shot, Sky Ride, Super Storm, and Wave Swinger. Meanwhile the kids will love the Boats, Car Combo, Dizzy Dragons, Jump Around, Motorcycles, and the Speedway. You can also enjoy the fun house they call Surf Shack or find your way through the Pirate's Island Maze. There are also two roller coasters you can ride, the Hot Tamales and the Pirates Hideaway.

And while you are in the area, why not explore Seaside Heights and find out what more it has to offer. Try out the products of Van Holten's Chocolates or enjoy a meal at Jimbo's Bar and Grill, The Music Man's Medleys Singing Ice Cream Parlour, JR's Bar, and Captain Hooks Bar. Further, you can play some more at Coin Castle or at RetroCade Classic Video Arcade.

And while you're on Coney Island, you might want to check out the other attractions in the area, including eating at Ruby's Bar & Grill, going on the Coney Island History Project Walking Tour, Luna Park at Coney Island, Sideshows by the Seashore, The Coney Island Museum, Coney Island Circus Sideshow, Coney Island Brewing Company, the New York Aquarium, Astroland Amusement Park, Brooklyn Wall of Remembrance, Green-Wood Cemetery, or watching the Brooklyn Cyclones play at the MCU Park.

Here is another one in Pennsylvania:

Idlewild and Soak Zone is an amusement park and waterpark for the entire family. It was first opened in the 1870s by the Mellon family and now has 16 water rides and more than 40 rides in total.

The park is divided into different sections. Olde Idlewild include the Philadelphia Toboggan Company Carousel, the Rollo Coaster, the rides in the Skooters, while Hootin' Holler is a historic village that pays tribute to the Bicentennial of the United States and includes several structures such as a general store, sheriff's office, newspaper office, blacksmith and wood shops, restaurant and saloon.

You can also join the Ligonier Highland Games, which is held primarily at Idlewild.

After your visit, you might want to explore more of Ligonier, PA. Be sure to check out Fort Ligonier, the Ligonier Country Market, Ligonier Beach, the Ligonier Valley Railroad Museum and the Ridgeview Golf Club. And you can visit all of that with a minibus rental in New York City.