Learning does not only take place in the classroom. So why not take the kids out and let them have a fun and educational time while exploring various places in NYC? Arrange for a 37-passenger executive coach bus in New York City and plan a field trip for the kids. 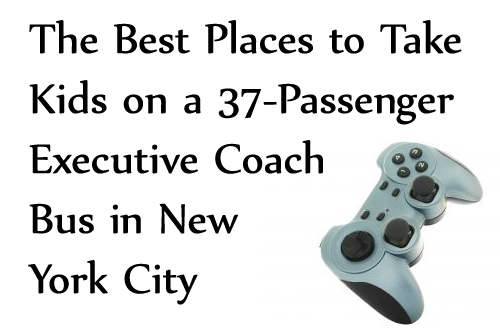 A 37-passenger executive coach bus in New York City is your best transportation option, especially if you have a group of eager little children. Now here are some of the kid-friendly venues that you should consider visiting with them:

Symphony Space brings together the different performing art forms and several events, such as theater shows, film showings, musical concerts, literary readings and dance productions. The Upper West Side organization has the Jay Sharp Theatre, where most performances take place. The theater accommodates around 760 people. For smaller and more intimate productions, there is the Leonard Nimoy Thalia, which can seat around 160 people. Symphony Space is also active in the city's Curriculum Arts Project, wherein the performing arts is taught in the city's public schools as part of social studies.

All that told, you would be delighted that there are a lot of kid-friendly productions and shows that you can catch. This means that not only will the kids enjoy what they are experiencing, but you will too. Productions here can be a little expensive, but you will be delighted to know that kids tickets usually means around $10 cheaper than the adult ticket price.

For a full schedule of performances, you can check out their Web site at symphonyspace.org or call them at (212) 864-5400. They also have a Facebook page that you can follow.

Symphony Space is a really great place to expose the kids to performing arts and theatre. So do not forget to get a 37-passenger executive coach bus in New York City and head over there to see what's showing.

Herd the kids into a 37-passenger executive coach bus in New York City and head to the Central Park Zoo. The zoo occupies 6.5 acres of space and is part of a group of four zoos, plus the New York Aquarium. The zoo is accredited by the Association of Zoos and Aquariums and managed by the Wildlife Conservation Society. The zoo holds the distinction of being the first zoo to open in the Big Apple in the 1860s.

The zoo features three major exhibit areas: polar, temperate and tropic. It also features a rainforest, an ant colony and a penguin house.

Check out the Polar Circle, where you could find penguins, puffins and harbor seals. Other animals you can view here include a snow leopards, sea lions, pandas, cranes, primates, lemurs, boa, and frogs, among many others. The kids will also love the animals at the children's zoo, including sheep, goats, pigs and other pettable pets!

If you go to the Brooklyn Bridge Park, drop by the Pier 6 Playground. The kids will love playing outdoors in what is considered as the best playground here in Brooklyn. The playground has 1.6 acres of space and is divided into four different areas. The Water Lab is where you cool off during a hot summer afternoon. It has a water jet field that the kids love. You also have the Swing Valley where they can imitate Tarzan as they swing from rope to rope, or just enjoy the ten swing sets here. Then there is the sandbox village where they can dig to their hearts' delight, and Slide Mountain, where they can go down two-story slides, play at the jungle gyms. Or they could rest while strolling down the Marsh Garden.

Apart from the playground, you can also play volleyball here. Or ride the ferry to Governors Island, and eat at Fornino.

And the beauty of coming here is that there are just so much to do. There are other playgrounds as well such as the Pier 2 swings, the playgrounds at Pier 1 and Pier 5, and other attractions in the park.

To help you organize your trip, we have listed down venues that would allow the kids to learn and to have fun. And you can go to as many of these venues as you can with a 37-passenger executive coach bus in New York City.

Read on for more of these venues on our list:

The New York Transit Museum gives you a chance to learn more about the Big Apple's subway, commuter rail, bus and tunnel systems. The museum is operated by the Metropolitan Transportation Authority.

There are several exhibits here, including:

The American Museum of Natural History

The American Museum of Natural History is one of the biggest museums in the entire world and has more than two dozen interconnected buildings in its complex. The museum, all in all, has close to four dozen permanent exhibit halls. The museum also features a library and planetarium for you to explore.

With more than 32 million specimens such as fossils, minerals, rocks, meteorites, cultural artifacts, plants, and meteorites, there are simply a lot of things for you to explore in a space that occupies 1.6 million sq. ft. Is it any wonder how this museum could easily draw more than five million visitors every year?

Check out the mammal halls, which give you a chance to see African and Asian mammals. Or see North American birds, as well as reptiles and amphibians from all over the world. Then learn more about biodiversity and environmental topics. Discover how humans came to be and find out about the cultures of different peoples. And be sure to devote some time at the fossil halls, the planetarium, and the Rose Center for Earth and Space. Of course, you should also get mesmerized at the Milstein Hall of Ocean Life.

The kids will certainly love the dinosaurs here. It will not fail to spark their imaginations, while also serving as an indoor playground.

A 37-passenger executive coach bus in New York City is the answer to your group transportation needs. It is just perfect for a small group of children going out to explore the city!

Historic Richmond Town is a living history museum and village in Staten Island.

There are more than thirty sites and buildings here, some of them dating back to the late 17th century right down to the early 20th century. It has more than 25 acres of space and gives you a taste of how life was like in the 19th century. You can have guided tours through a variety of houses here, each one representing a different era and period. There are times when you could also catch a demonstration of old trades, household activities, crafts and other similar activities. You could also attend the activities and events that they have such as quilting classes, Tavern Concerts, picking pumpkins, the County Fair, and country dancing, among many others. Learn how to churn butter and chop firewood.

There is the Third County Courthouse, which was built in the 1830s.

You can also check out the Voorlezer's House, the oldest exhibit in the village. This is also the oldest elementary school house in the country. Be sure not to miss out on visiting the Guyon-Lake-Tysen House, the Christopher House, the Crocheron House, the Stephens-Black House, the Britton Cottage, the John Bennett House, the Treasure House, and the Boehm House.

Museum of the Moving Image

The Museum of the Moving Image is located in Queens. This is where you go if you are interested in the history, technique, technology and art of television, digital media and film. They collect and preserve moving image artifacts and make them accessible to the public.

You could also attend panel discussions on movies here, as well as check out the video games that are part of the collection. The museum typically welcomes at least 120,000 visitors a year.

If you have older kids or teens, this is the best place to go. Movie buffs would love Behind the Screen, where they can see memorabilia and equipment used in making movies. The exhibit also has interactive components. You can find Star Trek Barbie dolls, a replica of Mrs. Doubtfire's head and the Yoda puppet that was used in Star Wars. You can edit popular films to your own liking, and play it.

The museum also has several temporary and traveling exhibits, as well as vintage video games, masks and props used in a variety of movies and TV shows.

The New Victory Theater is located in Midtown, Manhattan and is the only theater in the Big Apple that has programming geared towards children and the whole family. You can watch theater shows, dance productions, puppet shows, opera, circus, physical theater and other types of shows. They also have workshops, professional development and other special events.

The off-Broadway theater has something for the kids the whole year round, so you can take the kids with you no matter what season it is.

Aside from the New Victory Theater, you can also check the Geffen Playhouse. The group has a long standing partnership with Story Pirates and has consistently come up with great productions for kids. What is unique about the Geffen Playhouse is that local kids get to be the playwright and the scriptwriter here. They get stories from kids and turn it into a performance, ensuring that every show is different. They also have a full season of performances for families.

Then you have the New York City Children's Theater, which promises a fun time for the entire family. The group produces original shows, including plays, puppet shows and musicals.

The Children's Museum of the Arts

The Children's Museum of the Arts is in Manhattan. The museum allows your kids to work with artists to learn sculpture, textiles, drawings, and even animation. Kids up to 15 years old will surely have fun here. CMA artists also work with children with disabilities, children in foster care, and those who are homeless.

The museum takes care of more than 2,000 pieces, some of them dating back to the 1930s. These pieces of children's art come from more than 50 countries around the world.

Another museum you might want to go to is the Garden State Children's Museum in New Jersey. The museum is worth visiting because of the many exhibits here, including:

This museum may be in New Jersey, but with a 37-passenger executive coach bus in New York City, it is but a short drive away!

A 37-passenger executive coach bus in New York City is the perfect transportation option for small groups as it is comfortable, convenient, luxurious, and, most importantly, safe for the kids.