If you are looking for other great places to visit in New York City, then consider going to the boroughs. You can get a charter bus in Brooklyn and visit its historic sites. 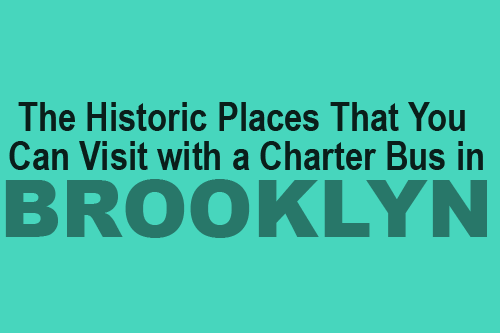 There are seven places in Brooklyn that are listed on the National Register of Historic Places. And you can tour these sites with a charter bus in Brooklyn.

The Buildings at 375-379 Flatbush Avenue and 185-187 Sterling Place are a group of four residential and commercial buildings in Prospect Heights. These buildings were built in the 1880s and have neo-Grec architecture with a hint of second empire elements. These buildings are now listed on the national register since the 1980s. Meanwhile, the Willoughby-Suydam Historic District has more than four dozen contributing buildings built in the 1900s.

Then check out Green-Wood Cemetery, which was founded in the 1830s. It was named a national historic landmark in 2006 and was added to the National Register of Historic Places in the 1990s. The cemetery takes inspiration from the Mount Auburn Cemetery located in Cambridge, Massachusetts in that it has a park like landscape. The cemetery took advantage of the varied topography here. It includes Battle Hill, the highest point of the borough that was built in the 1830s. Battle Hill is where you could find Altar to Liberty: Minerva, a Frederick Ruckstull Revolutionary War monument.

Other monuments found in the cemetery are the DeWitt Clinton statue, the family memorial constructed by James Brown to commemorate his family members who perished on the SS Arctic, and a Civil War Memorial.

More than a third of the reportedly close to 300 people who died from the Brooklyn Theater Fire in 1876 and were unidentified are buried in a common grave in the cemetery. More than two dozen others are buried in different parts of the cemetery. Other notable people buried here include Augustus Chapman Allen, Albert Anastasia, Jean-Michel Basquiat, George Wesley Bellows, Samuel Blatchford, Alice Cary, William J. Coombs, Mabel Smith Douglass, Horace Greeley, Rufus Wilmot Griswold, Richard Isay, Frederick August Otto Schwarz, and Juan Trippe, among many others.

Today, we are also suggesting that you gather friends and family on a charter bus in Brooklyn and go to Prospect Park.

Prospect Park has close to 600 acres of space. The public park was created in the 1860s and welcomes around eight million people every year. It was designed by Calvert Vaux and Frederick Law Olmsted, who also designed Central Park. The park features man-made lakes and waterways, as well as a 146-acre section called the Ravine District.

Prospect Park has several recreational opportunities such as seven baseball fields, two of which are sized for the major leagues. You also have the Prospect Park Track Club that was formed in the 1970s and still trains in the park's 3.35-mile long loop, while the Prospect Park Women's Softball League plays softball games in the area for more than two decades now. You can also go pedal boating on the lake and go ice skating, sledding and cross-country skiing in the winter months.

You can catch a concert at the Bandshell, such as Celebrate Brooklyn and the summer concert series. There are also a lot of sports and activities on the Parade Ground. You could also check out the tennis, basketball and volleyball courts, the football, softball and soccer fields, the Paul Ricard Petanque Court and three huge multi-purpose fields.

Then there are two historic parkways that you could visit as well. First, there is Ocean Parkway. The boulevard goes for close to five miles from Prospect Park to Brighton Beach. The parkway was designed by Frederick Law Olmsted and Calvert Vaux, who were also responsible for designing the Eastern Parkway, Prospect Park and Central Park.

Eastern Parkway, another boulevard designed by Olmsted and Vaux, runs from Grand Army Plaza through Ralph Avenue and then to Evergreen Cemetery. This was the world's first parkway.

History does not have to be boring and we are here to tell you that you should rent a charter bus in Brooklyn and see the nationally registered historic sites in the borough.

Perhaps the most popular of Brooklyn's nationally registered historic sites is the Brooklyn Bridge. The bridge spans East River and was built in the 1880s with designs by John Augustus Roebling. The bridge has six lanes for cars and allows for pedestrian and bike traffic on the bridge. It has a main span of close to 1,600 feet and it was the first steel wire suspension bridge when it opened.

A lot of historic events happened on the Brooklyn Bridge, including:

At the time of its opening, the Brooklyn Bridge was a marvel of technology and became a symbol of optimism for most people. Today, people go on the bridge to jog or walk, or just keep fit. Others take the opportunity to catch the astounding views of New York City and Brooklyn. Lovers leave love locks on the bridge, on which they inscribe their names or initials on the lock, attach the lock to the bridge and throw the key into the water, although the practice is explicitly illegal in the Big Apple.

You should also visit the Brooklyn Bridge Park, which has 85 acres of space and has several sections, each one providing you with a lot of opportunities to have fun, find some outdoor recreation, have a picnic, or just relax.