New Brunswick is home to more than 55,000 people. It is also the home of Rutgers University and of several other attractions that you can visit on a bus rental in New Brunswick. 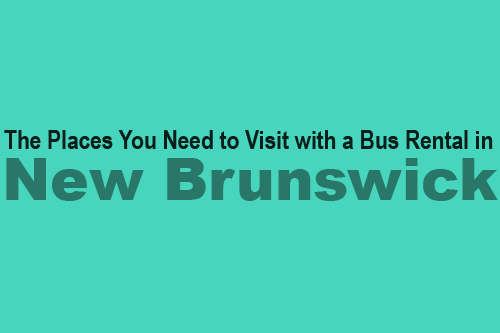 A bus rental in New Brunswick is the best way to tour new cities and places. It can accommodate groups of 24, 49 and 60 passengers. Have the ideal vacation and make memories with the people closest to you!

Let Custom Coach & Limo take you to the following places:

The city has several attractions and venues that would appeal to art lovers who visit. First, let us take a look at the theaters in the city where you could catch a great performance. You have State Theatre, which was opened in the 1920s and has a capacity for 1,800 people. The nonprofit theater was a vaudeville theater that also showed movies. It was renovated in the 1980s and the in the early 2000s. Some of the biggest names have performed here, including Jay Leno, Peter, Paul and Mary, the Jerusalem Symphony Orchestra and Chubby Checker. Some of the shows that they have produced over the years include Annie, Mad Men, and Once.

Then you can check out the George Street Playhouse, one of New Jersey's premiere professional theatres. The group is often responsible for producing established and new works. The theater was founded in the 1970s and currently produces several performances including Nureyev's Eyes, Sex with Strangers, and My Name is Asher Lev, and other on- and off-Broadway productions.

Or perhaps, you can go and have fun at Stress Factory Comedy Club. You can have a delicious dinner with a comedy show.

You can also watch the productions of Crossroads Theatre, which is located in the city's theatre district. The Crossroads Theatre was founded in the 1970s and has won the Regional Theatre Tony Award in 1999. The African American theatre has been responsible for premiering more than 50 new plays over the course of its existence and has seen the likes of August Wilson, George C. Wolfe, Ntozake Shange and Migdalia Cruz. Notable productions include the Colored Museum, Spunk, Jitney, Fly, Sheila's Day and It Ain't Nothin' But the Blues by Ron Taylor and others.

While you are at it, why not watch the American Repertory Ballet in action? The ballet company was founded in the 1960s and has several performances throughout the year, including Nutcracker. The group also has a dance school and hosts several events. The ballet company is housed inside the Crossroad Theatre.

Rutgers University also has several performance groups and venues that you could go to. That includes the Bettenbender Plaza, an outdoor space that serves as meeting place and gathering spot, as well as performance space. Or you could check out the Cabaret Theatre for an assortment of theater shows and productions. The Loree Dance Theater has space for 220 people in the audience and regularly hosts dance productions. Other venues inside the campus are Jameson Studio Theater, Kirkpatrick Chapel, Marryott Music Building, Nicholas Music Center, Philip J. Levin Theater, Schare Recital Hall, and the Victoria J. Mastrobuono Theater.

When you tour the city on a bus rental in New Brunswick, you do not only get a comfortable and luxurious ride, but you also get convenience and the assurance that you would not waste time trying to find a suitable transportation for your group. That allows you to do more and see more.

Now where else to go in New Brunswick?

After checking out the performances, you can also visit the city's many museums. That includes the Zimmerli Art Museum at Rutgers University. The museum has more than 60,000 artworks, including the Dodge Collection, which contains works from Russian and Soviet nonconformist artists, as well as American art throughout the years and European art that spans more than 600 years. The museum is also well known for its works on paper, prints, photographs and illustrations.

The museum was founded in the 1960s in time for the university's bicentennial. It currently occupies 70,000 square feet of space and its permanent collection includes 16,500 pieces of American Art with modern and contemporary styles such as surrealism, precisionism, abstract expressionism, and other style. European artworks date back to the Renaissance with French 19th century artworks taking center stage.

Afterward, go to Rutgers University Geology Museum, where you can learn about the earth, anthropology, and geology through exhibits, lectures and collections. And while you are on campus, do check out Albus Cavus, a collective of educators and artists that started out as an underground art gallery. Other places you could go to for the best visual arts in the city include Mason Gross Galleries at Civic Square, Robert E. Mortensen Hall, and Rutgers Cinema.

These are just some of the places that you could visit with a bus rental in New Brunswick and there are certainly a lot more!

Planning to hire a bus rental in New Brunswick for your arts and culture excusion? Then call Custom Coach & Limo at +1 866 952 8737 today.

If you love history, then you should gather your friends on a bus rental in New Brunswick and check out the nationally registered historic places in the city.

The First Reformed Church was built in the 1810s and has a mix of architectural styles including federal, Georgian and Italianate designs. The church is for a congregation that was founded in the early 1700s and is where several former Rutgers University presidents are buried, including Jacob Rutsen Hardenbergh, Ira Condict, and Theodore Frelinghuysen, who also became a United States senator.

Or visit the William H. Johnson House, which was built in the 1870s. The house was built for a rich businessman who owned a house painting and wall paper hanging company. The house has a fine Victorian architecture and has an Italianate style. It was listed on the state and national registers of historic places in 2006. Another historic house you can go to is the Levi D. Jarrard House, a historic building located inside the campus of Douglass College at Rutgers. The house was built in 1868 and is now used as the College Hall. It has an Italian villa architecture. Meanwhile, the Henry Guest House is a Georgian stone farmhouse that was built in the 1760s for the alderman. Guest was an associate of Thomas Paine and John Adams.

Wood Lawn is now known as the Eagleton Institute of Politics. Located inside the Rutgers University campus, the classical revival structure was added to the state and national registers in the 1970s. The institute was established in the 1950s. Meanwhile, the Buccleuch Mansion was built in the 1730s and sports a colonial architecture. Other historic houses you can go to are Demarest House, James Bishop House, and the Thomas I. Agnew House.

A bus rental in New Brunswick can make touring a whole lot more comfortable. So get one and go to the Livingston Avenue Historic District, bounded by Livingston Avenue and Morris Street, is listed on both the state and national registers of historic places. The historic district has several notable places such as Willow Grove Cemetery, the New Brunswick Free Public Library, and the Henry Guest House. the district has around five dozen contributing buildings, structures and sites. You could admire the architecture in the area, such fine examples of Queen Anne, colonial revival, Italianate, second empire, classical revival, beaux arts, Romanesque, late gothic revival, federal, Georgian and Greek revival.

You can also go to the Main Post Office, which was built in the 1930s and located in Civic Square District. Wesley Sherwood Bessell served as its architect, giving it a neo-Georgian design. It was added to both the state and national registers in 1984.

As you can already guess, a number of historic sites are located within Rutgers University. One is the Queens Campus, which spans one city block and overlooks the Raritan River. It has one of the best examples of federal architecture and was added to the national register in the 1970s. It is also a national historic landmark.

The Christ Episcopal Church is an active church that was built in the 1740s. It has a mission parish architecture with a mixture of styles including gothic revival, federal, Italianate and Romanesque revival. It was originally designed by Philip French and then by Henry Dudley and Frederick Wills. It was added both to the state and national registers of historic places in 1989. Some of the notable burials here include those of Reverend Abraham Beach, John Croes, Captain Isaac Fisher, Brigadier Gen. Anthony Walton White, Henry Blumer, Adm. Charles Stuart Boggs, and Lieut. Robert Morris Boggs.

The Poile Zedek Synagogue was built in the 1920s. The Romanesque church building was designed by Harry Bach and Morris Frieman. Meanwhile, the Saint Peter the Apostle Church was built in the 1860s and has a gothic revival and Greek revival architecture designed by Patrick Charles Keely and Jeremiah O'Rourke. You can also go to the Saint Mary of Mount Virgin Roman Catholic Church.

Aside from the historic churches, you can also go to the Delaware and Raritan Canal. The canal was built in the 1830s, connecting the Raritan River and the Delaware River. It is now a state park where you can kayak, canoe, and fish. It also features a hiking, biking, horseback riding and jogging trail. The state park provides visitors with wonderful views, especially the Lake Carnegie segment located in Princeton.

A bus rental in New Brunswick can help you tour the many historic places in the city. It will help you get to all the places you want to go, as well as cram in more places even when you are in town for only a short while.

In short, with a bus rental in New Brunswick, you can expect to visit more places and make more memories.

You can check out the New Brunswick New Jersey Transit Northeast Corridor Line Station. It was opened in 1903 and serves close to 5,000 passengers every day. It is also a terminal for the Amtrak Northeast Corridor, which close to 9,000 passengers use every day. And you also have the former National Musical String Company, which was built in the 1890s.

As you can see, there is no shortage of historic sites in New Brunswick that you could visit. Be sure to plan your vacation well and be sure to call us for your bus rental in New Brunswick.

Where else can you go? How about a garden?

Hike, bike, or just stroll down the biggest free gardens in the Garden State. At the Rutgers Gardens, you can relax amidst a variety of plants and flowers, or you can have picnic. The gardens have at least 180 acres of space and is open all year round.

Several events are held here, including farmers markets, walk and talk events, and other seasonal activities. They also have nature programs for kids!

You will never run out of places to go and things to do when you decide to have your vacation in New Brunswick. It only makes sense that you call Custom Coach & Limo at +1 866 952 8737 and reserve your bus rental in New Brunswick for your trip today.